Catch Up On Past Lessons By Watching The Recordings

Goal: Give students a better understanding of their subject and build confidence.

Tuition Farm’s live online grinds classes are taught by highly qualified and experienced teachers, who are experts in their subject.

Classes are presented in a lecture style format with a Q & A session at the end.

Our style of teaching provides students with the opportunity to learn in an uninterrupted environment and equips them with the fundamental skills required for life in higher education.

This course runs to April 2022 and covers all the content from the current curriculum.

All classes are recorded, which means students can catch up on any classes they may have missed or use later for revision.

All student gets a complete set of class revision notes in advance of each lesson.

The total cost of this online grinds course is only €239.

Below is a recording of one of our classes from early 2021, along with a copy of the class notes for the lesson.

Class Notes for Above Lesson (Refresh page if not visible)

What Will I Learn?

Topics for this course

Functions and their graphical representations will be discussed. Questions will be completed using different factorization methods such as the difference between two squares, and the manipulation of algebraic formulae, for instance algebraic fractions. Logarithms and Exponential functions will also be examined.

A recap on the rules for logarithmic and exponential functions will be discussed. This will be followed by several examples on how to manipulate logarithmic functions and solve such formulae. Methods such as ‘u substitution’ will also be considered. Manipulation and simplification of surds will be covered after which several cases of simultaneous equations will be completed. Examples of how to determine the roots of a cubic equation will also be explained.

Sequences and Series and Financial Maths?

The difference between a sequence and a series is explained. A method of determining if a series is arithmetic or geometric is carried out as well as an investigation into both. Limits are introduced and how to solve such problems. Finally, infinite series and sequences are introduced and their applications such as reoccurring decimals.

Sequences and Series and Financial Maths?

Percentage profit and loss is discussed. Different types of income tax are also explained, such as PRSI and USC. An example of present and future value analyzed. Compound interest examples are then carried out. Depreciation examples are completed as well as different interest period and rates questions. Finally, savings, investments, loans and mortgages questions are carried out using both the amortization formula and sequences and series.

An explanation of why complex number is needed. The Argand Diagram is introduced and how to analyze the modulus and the argument from the diagram as well as from their equations. Operations on complex numbers are carried out, such as their sum, products, addition and multiplication. Complex equations are also introduced and how to analyze their solutions.

Focusing on Complex Equations and the Conjugate Root Theorem. An explanation of the polar form is given and a step by step analysis is provided on transforming from the cartesian to polar coordinates. Operations on the polar form of the complex number will be carried out. Finally, De Moivre’s Theorem will be introduced as well as several examples of its uses.

We review Pythagorus’ Theorem and different equations such as the arc of a circle to solve several problems. The unit circle and its properties will be presented. Several examples on solving trigonometric functions are carried out. A step-by-step guide to drawing trigonometric lines is introduced and their properties such as range, period etc.

The Line and the Circle?

Different formulae for properties of a line are analyzed, slope, perpendicular distance, midpoint etc. Problems including areas of triangles, dividing lines in ratios and perpendicular distance are solved demonstrating uses of these formulae. The circle formula is also introduced and how to determine the radius and centre from the equation of a circle.

The Line and the Circle?

The circle is introduced and how to write the equation of a circle given certain information. Several examples are then carried out involving a line and a circle, touching circles, using algebraic and geometric approaches.

The concept of a probability distribution and expected values is examined. Examples of where one can use the expected value is also considered. The Bernoulli Trials is introduced, and several problems are solved using this method. Questions on the margin of error, confidence levels, p values and hypothesis testing are discussed. These concepts will be introduced in statistics.

Different types of data and sampling are explained, and statistical definitions are also given. Methods of recognizing bias and limits are explained, such as mean, median mode, skewed data etc. The standard deviation is introduced and how to calculate its value from a data set. Finally, percentiles, histograms, stem and leaf plots, bar charts and scatter plots are discussed where the correlation fit, line of best fit and clusters are explained for the latter.

The concept of a probability distribution is explained. Bernoulli trials and their uses are also introduced, and several examples are carried out. The empirical rule is stated and definitions such as the margin of error, confidence intervals and constructing these are explained. Finally, hypothesis tests are completed using both p values and confidence intervals.

The structure of an answer using proof by induction is introduced. A step-by-step guide to solutions of the three different types of induction questions (Summation, division and inequality) is provided and example questions will be answered. Common questions and De Moivres proof are also provided. 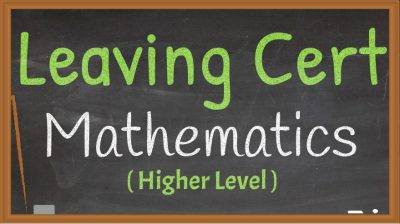